Currently I’m reading a novel called The Invisible Legion by Jenő Rejtő, but I hit a slump the week after Christmas, and decided to shake off the doldrums by reading one of the comics I bought in Hungary years ago, a translation of Justice League Adventures. Since I have both the translation and the original there was the added advantage that I could check my work.

It took about two weeks to read through the whole book (which contains five issues), and I’m now going through the process of comparing my understanding of the text to the original. Ordinarily I would judge myself on felicity of expression, but I didn’t do an actual translation this time around, so I’m only looking for errors of comprehension. (A bit humbling. I feel I’m advanced enough that I shouldn’t be making any errors, but I’m still puzzling out sentences instead of just getting them, so I screw up sometimes.)

But I also get to observe how the Hungarian translator handled the material, and it’s interesting to see how often he uses dialogue that (presumably) sounds more natural in Hungarian, but doesn’t mean quite the same thing as the original. (To be clear, I don’t disapprove, I’m intellectually curious. That’s one area where I’m still not quite sure what the right approach is.)

As an example, here are a few panels from the comic: 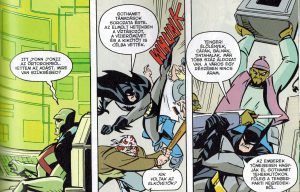 My construal of the meaning:

J’onn J’onnz here (speaking) from the Watchtower. I received your transmission. What assistance do you require?

Gotham has been hit by a series of attacks. In the last few weeks they’ve targeted the water reservoir,  the hydroelectric plant and the harbor.

Who were the perpetrators?

Sea creatures. Sharks, whales, squid. There are already over a hundred victims. A section of the city is without power. People are abandoning Gotham in truckloads. Mainly from the quarter by the shore.

I read you. This is J’onn in the Watchtower. What do you need, Batman?

Gotham’s under an attack of sorts. In the past few weeks the reservoir, hydroelectric plant and harbor have been hit. Badly.

When you say hit, you mean …

Assaulted. By sea life. Sharks, whales, squid. The casualties are in the hundreds. Parts of the city are out of power. People are leaving Gotham by truckloads, especially those in seaside residential areas.

What I find most interesting is how the translator obviously didn’t see a good way to translate the incomplete question “When you say hit, you mean …” and substituted a different question, to which Batman’s response would still make sense. Also interesting, how the translator swapped the order of the sentences in the first panel.

This has been a good exercise. I plan to finish the comparison over the weekend, and then on Monday I’ll swap novels and begin work on Margit Kaffka’s The Years of Maria, which I’m quite looking forward to reading. (The Invisible Legion isn’t exactly bad, but the colonialist attitudes are, shall we say, very much of their time.)